posted by The Bewitchin Kitchen on October 16, 2013

Disney’s The Little Mermaid Is Now On Blu-ray 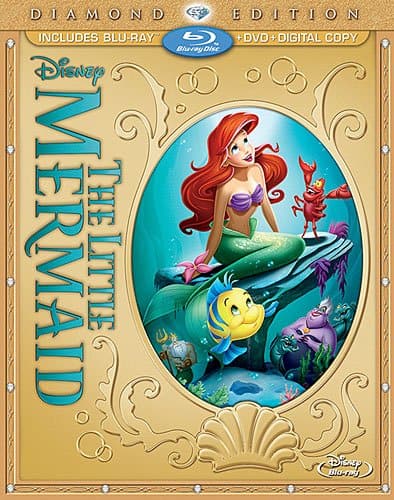 Ariel (voiced by Jodi Benson), is a free-spirited mermaid, who is off on the adventure of a lifetime with her best friend, the adorable Flounder (voiced by Jason Marin), and the reggae-singing Caribbean crab Sebastian (voiced by Samuel E. Wright) at her side. But it will take all of her courage and determination to make her dreams come true—and save her father’s beloved kingdom from the sneaky sea witch Ursula (voiced by Pat Carroll).

The Little Mermaid first came out in 1989 and has been inspiring young girls and families ever since, I think everyone has a favorite moment in the movie. Mine is when she was using the fork to comb her hair as a human, it’s innocent and and incredibly sweet. It’s a cute movie that I don’t think will ever go out of style. Whenever I have seen it released (or any Disney movie re-released) it gains popularity all over again.

With the fact that this beloved movie is on Blu-ray, not only can you expect an amazing picture, but you’ll also receive some fun and informative bonus features that the whole family can enjoy.
Bonus Features Include:

To celebrate the re-release of this Disney classic, check out this link and receive a bunch of free printables, coloring pages and games for the whole family to enjoy.

Getting Ready For The Holidays With Rubbermaid