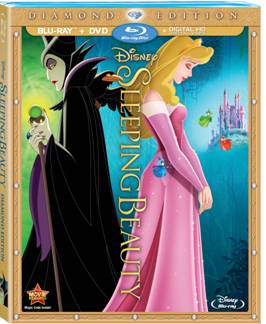 I absolutely love it when Disney releases some of my favourite classic Disney stories. Sleeping Beauty is no exception.

I remember being a little girl and watching Sleeping Beauty, I was obsessed with the name Aurora for a long time – I even had a couple dolls and Barbies named Aurora and Briar Rose for after watching the movie. I’m sure this is something that a few of you can relate to as well.

“Sleeping Beauty” tells the wondrous tale of a princess cursed by an evil fairy, protected by three loving fairies and, ultimately, saved by “true love’s kiss.” Featuring the voice talents of renowned opera singer Mary Costa as Sleeping Beauty and Disney stalwart Eleanor Audley as the evil fairy, Maleficent, the film’s vibrant visuals were created by a team that included Milt Kahl and Ollie Johnston, two of Disney’s legendary Nine Old Men and an Academy Award®-nominated score, 1959, adapted from the incandescent music of Peter Tchaikovsky. “Sleeping Beauty” is the sixteenth animated feature in the Disney animated features canon and was the last animated feature produced by Walt Disney to be based upon a fairy tale. It is the tenth film released as part of Disney’s prestigious Blu-ray Diamond Collection.

The diamond edition has been digitally remastered and restored picture and sound for a home theatre experience. Plus experience these exciting bonus features:

I can’t wait to sit down and watch Sleeping Beauty with my family and introduce my son to this Disney Classic.

I have one question: Pink or Blue?

Stain Removal With Purex plus Oxi