posted by The Bewitchin Kitchen on January 23, 2017 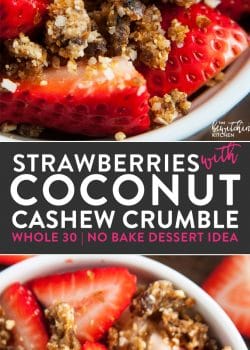 This simple recipe for Strawberries with Coconut Cashew Crumble is a delicious (and Whole30 approved) snack that can also double as a breakfast side.

However, I used this recipe to ward off the sugar dragon and wean myself off late night treats.

Since starting Whole30, I have noticed that my taste buds have changed. Food is sweeter, and I’m finding myself satisfied with simple fruit.

It may be a little premature to say this but, I’m no longer under the rule of chocolate (hooray).

As I write this, I’m only a week in – so maybe I’m being positive. I don’t know, I’m not sure what to expect. Call me optimistic!

The night I made this recipe for Strawberries with Coconut Cashew Crumble was the day I made the Coconut Cashew Bars. I was cutting up strawberries, and prepping them for snacks for the week when I thought that the two would work together nicely.

It’s a sweet treat that fills me. Yay! I’m satisfied with how I felt after, meaning it didn’t spark any further sugar cravings, or as Melissa Hartwig calls it “feeding your sugar dragon” so I’m confident I’ll make this again (probably tomorrow).

However, if you find that it sparks your inner sugar dragon (meaning you crave sugars) and you’re on a Whole30, then don’t make it again. What works for me, may not work for you so please remember that. We’re all different 🙂

Not Whole30? This recipe also falls under a paleo dessert too.

The best part – there are only four ingredients in it!

This delicious (and healthy) snack not only satisfies my hunger but makes me feel good about what I’m eating. I’m not sure if it’s my tastebuds changes or if I’m going crazy but I taste a sweet vanilla note, yet there is no vanilla in the recipe. It’s magical.

Want to kick it up a bit? Add some coconut cream, it’s super easy to make!

Simply add a can of coconut milk in the fridge, after a few hours scoop the waxy fat (I know that sounds unappealing, just go with it) out and whip it up. It’s really good.

Other ways you can incorporate this Whole30 dessert into other meals:

Here are some Whole30 tools that have helped me in my Whole30 challenge: 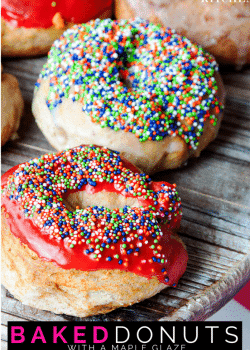 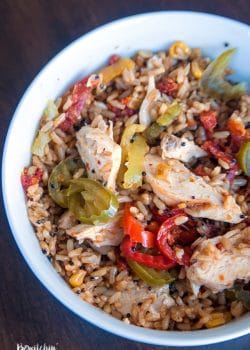